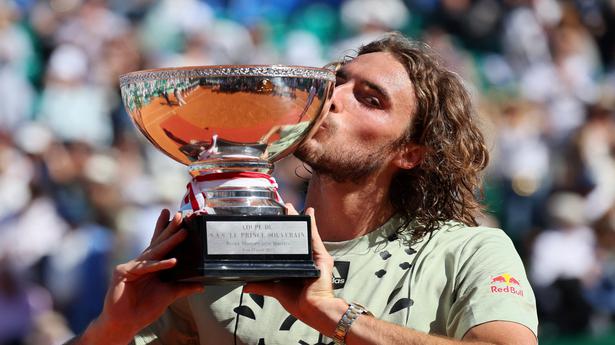 Stefanos Tsitsipas seemed happy to hear the fans “scream and sing” again at the Monte Carlo Masters as he beat unseeded Alejandro Davidovich Fokina 6-3, 7-6(3) to retain his title on Sunday.

“It’s a great feeling because we’ve had the crowd this year,” the third-seeded Greek said after winning the first grand final of the season on clay. “It was a bit livelier than last year.”

COVID-19 meant the 2020 edition was canceled and the 2021 tournament was held without fans. Thus, Tsitsipas felt the intensity more en route to an eighth career title.

“It’s a lot more annoying to have people involved, you have the fans screaming and singing, but it was a great way to top it off with a lot of fighting at the end,” Tsitsipas said. “He fought in times when I didn’t expect him to fight.”

Davidovich Fokina, the Spaniard who knocked out Novak Djokovic in the second round, was playing in his first ATP final.

Tsitsipas, who lost last year’s French Open final in five sets to Djokovic after leading 2-0, became the first repeat champion at the Monte Carlo Masters since Rafael Nadal in 2018.

Tsitsipas won the first set despite an early break. Davidovic Fokina overcame an early break in the second and got broken twice. Tsitsipas squandered a chance to serve out the match at 5-4 but still wrapped up the final in 1 hour and 36 minutes.

“I’m very proud of myself,” Tsitsipas said. “Things weren’t going well at one point, but I managed to stay calm.”

The identity of his opponent in Sunday’s final surprised many.

“I have to admit he was not the Spaniard I expected in the final,” said Zeljko Franulovic, tournament director 11-time winner Rafael Nadal not playing in Monte Carlo due to a rib injury.

Besides knocking out Djokovic, Davidovich Fokina also beat Indian Wells champion Taylor Fritz in the quarter-finals and Grigor Dimitrov in the semi-finals.

“It was an amazing experience,” the 22-year-old Spaniard said of the tournament.

Davidovich Fokina said it boosted his confidence for the rest of the season.

“I will focus on every point, every game,” Davidovich Fokina said.