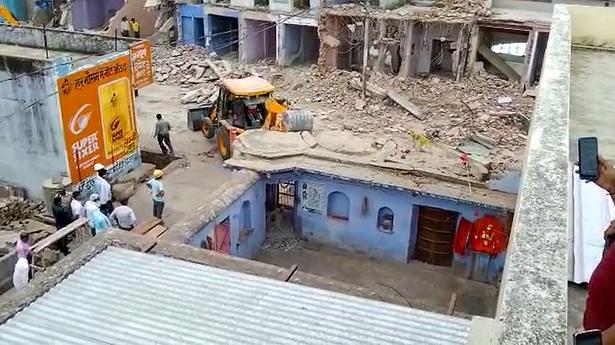 The BJP and Congress on Friday swapped accusations over the demolition of two temples during an anti-encroachment campaign in Rajgarh town of Alwar district this week.

While Rajasthan BJP President Satish Poonia accused Congress of being behind the demolition, State Congress Leader Govind Singh Dotasra said it was the decision of the Municipality of the BJP-ruled city.

Two temples and a few shops were demolished in Rajgarh on Sunday and Monday, with officials describing the action as part of an anti-encroachment campaign to widen a road. They said the demolition had been approved by the council of Rajgarh Nagar Palika.

The BJP has targeted the Congress government over the teardown, saying the party should face the consequences. Claiming that one of the demolished temples was 300 years old, Mr Poonia said videos circulating on social media showed a bulldozer demolishing the ancient Shiva temple.

“It is in the public domain that all of these actions were taken at the request of the state government,” he said.

Refuting the allegations, Mr. Dotasra accused the BJP of misleading people and playing politics instead of religion.

He said that even under the rule of the former BJP government led by Vasundhara Raje, hundreds of temples were demolished in Jaipur.

Mr. Dotasra said the demolition proposal was passed by the BJP-led Rajgarh City Council, which is solely responsible for the demolitions.

“It is the habit of the BJP and the RSS to make mistakes and spread community frenzy. One temple was private and the idols were removed and the second temple was partially demolished but its sanctum sanctorum is safe,” he said.