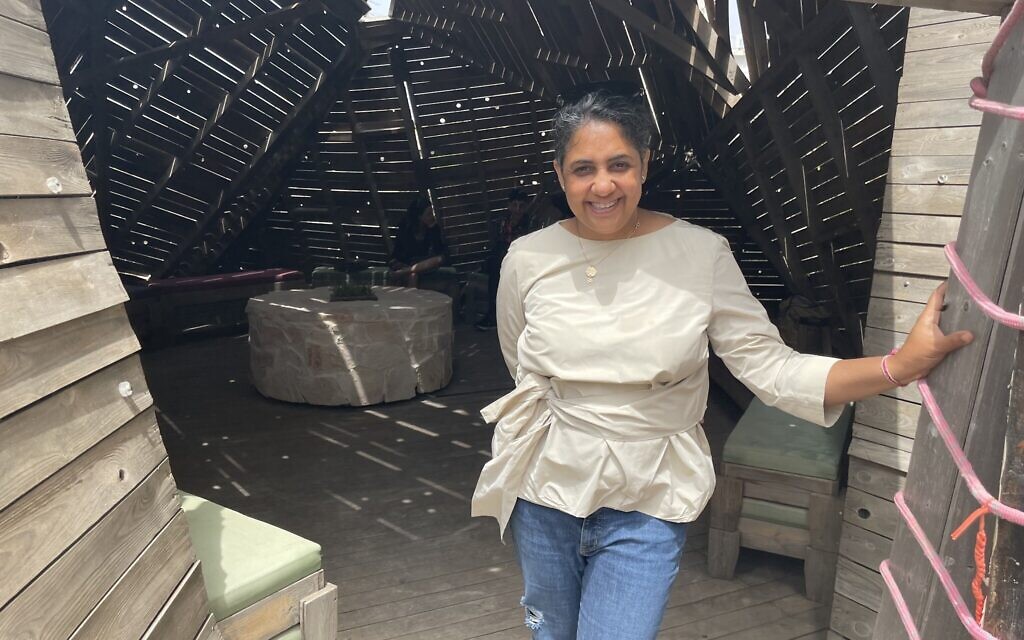 Jerusalem now has a temple shared by three religions. Created by a visiting Indian artist, it is located on the terrace of Muslala, an urban rooftop site atop the iconic Clal building in the city center.

The space, a wooden meditation structure originally built for Israel’s Midburn Festival and later moved to Muslala, is centered by a stone altar emitting soulful sounds and chants, harmonious chants and hymns , sung by religious leaders and teachers in Jerusalem.

Vibha Galhotra, who spent three months in Jerusalem as part of Jerusalem International Fellows, a 10-week residency program for artists, recorded each religious figure for her project and then constructed the round altar from slabs of stone of creamy Jerusalem, over the course of three days.

She calls it “From the mountain to the sea”. It’s a sort of playlist for open-source religion, where the guiding principle is open-mindedness. The built-in audio recorder inside the altar plays a continuous 45 minute loop of the sounds offered by Galhotra’s group of spirit guides.

“There has to be a point where everyone can all come together, for a common cause,” she said.

The common cause in this project, however, is not really religion. While the voices recorded are those of people preaching and teaching about religious subjects, they spoke to Galhotra about climate change and the environment, a common theme in her work as a visual artist.

Using sound for his work was a first for Galhotra, who does not speak the languages ​​of the various participants but found that their sounds and melodies conveyed their messages.

“I think we need to ask different kinds of questions,” she said. “Art gives me the power to ask simple questions.”

Galhotra spoke with more than a dozen religious thinkers and leaders, including Franciscan nuns, a friar of the Holy Sepulchre, a member of the Coptic church, a muezzin and an imam from a mosque in the old city, as well as a Jewish philosopher, a cantor and teachers.

Each religious representative was able to carefully select the music that represented him.

They were open to talking with Galhotra because she was asking about climate change, she noted.

“If I had asked about religion, it would be sticking my nose in their business,” Galhotra said. “The question was not offensive. It’s a question of sustainability.

So far, Galhotra said, her audience is responding, with people sitting for long periods listening to the sounds of “Mountain to the Sea” as they consider the messages inherent in the tones and songs.

“Mountain to the Sea” is in place at Muslala, which will hold a festival called Gag Eden (Roof of Eden) from June 6-9.

Guest artists Anna Lublina (second from right) and Vibha Galhotra (far right), members of the Jerusalem International Fellows at a trade show at Studio of Their Own in late March 2022 (Jessica Steinberg/Times of Israel)

Galhotra was one of five international Jerusalem Fellows, who are brought to the city each year to collaborate with artists, ensembles and cultural institutions in East and West Jerusalem.

His fellow artists were Claudia Lavista, a Mexican choreographer who worked with the Catamon dance troupe; Anna Lublina, a visual artist from the United States and Germany who held a workshop at the Bloomfield Science Museum on fabric and weaving; and Sofia Borges from San Paulo, Brazil, who taught visual arts at Ibdaa School of the Arts, a high school in the Sheikh Jarrah neighborhood.

Each of the fellows spent the 10 weeks meeting and working with local Jerusalemites, and held a salon about their process and findings toward the end of their stay.

“The goal is not to make the best work of art but to connect with Jerusalem’s cultural ecosystem,” said Elise Bernhardt, founder and director of Jerusalem International Fellows.

You are a dedicated reader

We’re really glad you read X Articles from The Times of Israel over the past month.

That’s why we started The Times of Israel ten years ago – to provide discerning readers like you with must-read coverage of Israel and the Jewish world.

So now we have a request. Unlike other media, we don’t have a paywall in place. But since the journalism we do is expensive, we invite readers to whom The Times of Israel has become important to help support our work by joining The Times of Israel community.

For just $6 a month, you can help support our quality journalism while benefiting from The Times of Israel WITHOUT ADVERTISINGas well as access Exclusive Content only available to members of the Times of Israel community.

Thanks,
David Horovitz, founding editor of The Times of Israel

Already a member? Log in to stop seeing this

“No human is a stranger”