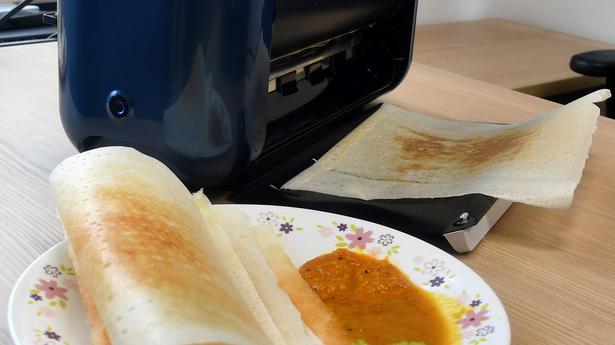 Watch | At the EvoChef office in Chennai, the printer makes A4 dosas

We load a fresh paste cartridge and try out the world’s first dosa printer, designed and manufactured in Chennai

We load a fresh paste cartridge and try out the world’s first dosa printer, designed and manufactured in Chennai

The hum of quiet conversation at Evochef’s Chennai office is regularly punctuated by the searing hiss and crackle of freshly printed dosas. The start-up’s unique, patented dosa printer rolls out eight uniform dosas in quick succession, then a member of staff fills its 700ml cartridge with freshly ground dough with convenient ease.

VML Senthilnathan, founder of Evochef and creator of what is called the world’s first portable dosa printer, looks at the gadget with almost fatherly fondness. The cartridge moves to coat the machine’s hot roller with dough, which is then pushed onto a portable tray in the shape of a neat rectangle.

In between, Senthilnathan rushes over to dab the shiny exterior of the machine with a handkerchief to remove a drop of paste. Reluctant and shy in the face of the media, he is most at ease when it comes to solving problems. That’s why he was baffled to find himself at the center of a recent social media storm when a video of his dosa printer went viral, sparking both curiosity and criticism.

“I’ve worked in R&D with Butterfly for over 15 years, and my expertise has been in kitchen appliances,” says Senthilnathan, explaining that he created and patented the smart dosa maker based on experience. practice. His family founded and owned Butterfly, a household name for small appliances from grinders to stoves, which was acquired by Crompton Greaves Consumer Electricals in February 2022. 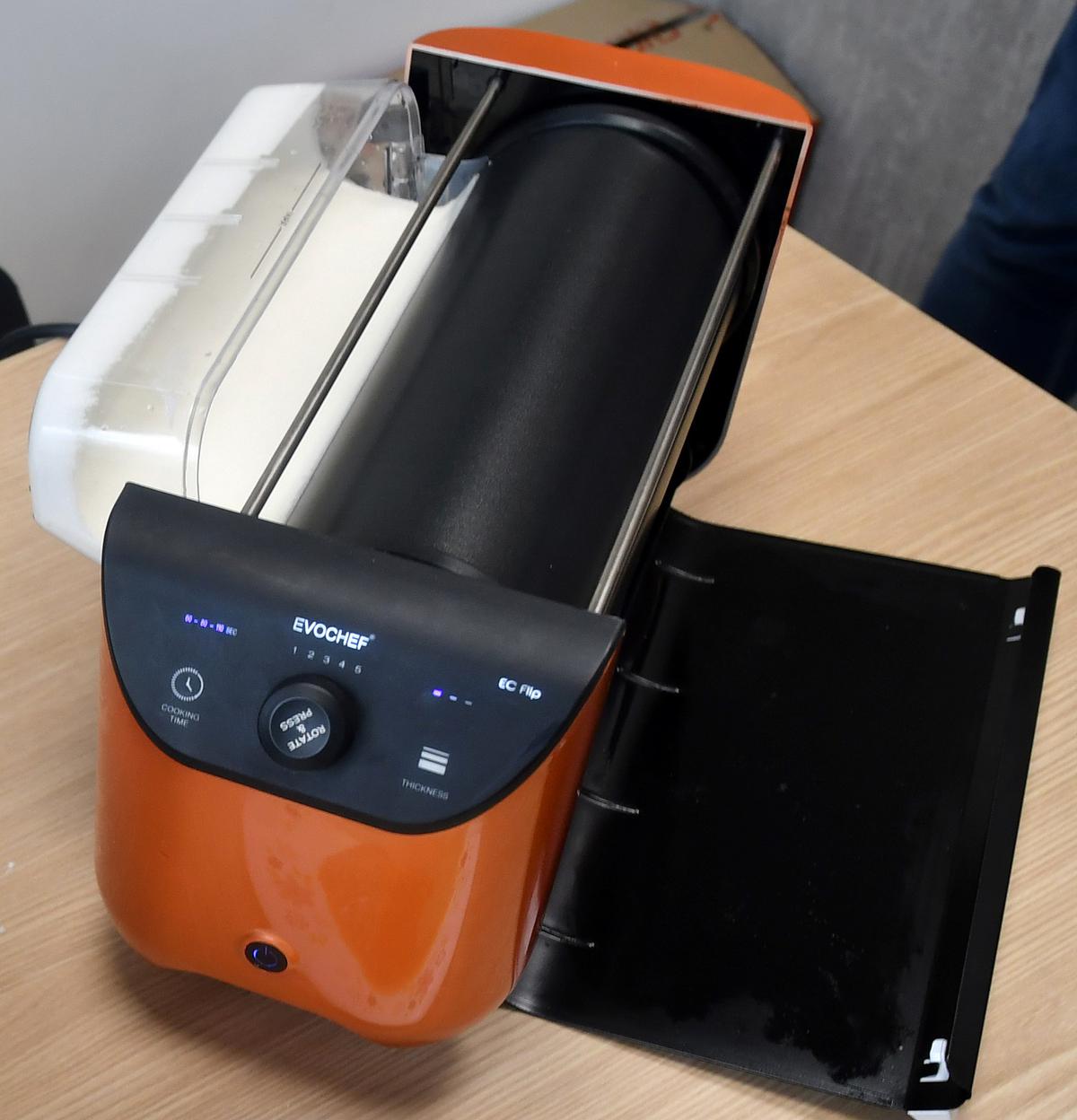 Meanwhile, Senthilnathan has spent the past three years building Evochef, a smart kitchen automation company. “We wanted to make mealtimes easier for people,” says Senthilnathan, explaining how the compact machine, which only needs a power outlet, can be used anywhere, making it useful for small kitchens. and offices.

Much of the discussion online revolves around the price, ₹15,999, perceived to be high for a product that requires you to provide the paste, not to mention the accompanying chutney and sambar. “But the paste is available everywhere now. And you can order chutney and sambar on an app,” he says. “The problem is that the cook has to stand in front of a stove for half an hour to make dosas. With this, you just need to press a few buttons.

The clever dosa maker has been undergoing closed-door testing with family and friends for two years. About 300 have been sold in India and 500 shipped overseas, but it was supposed to be officially unveiled to the public next week, according to their original schedule. 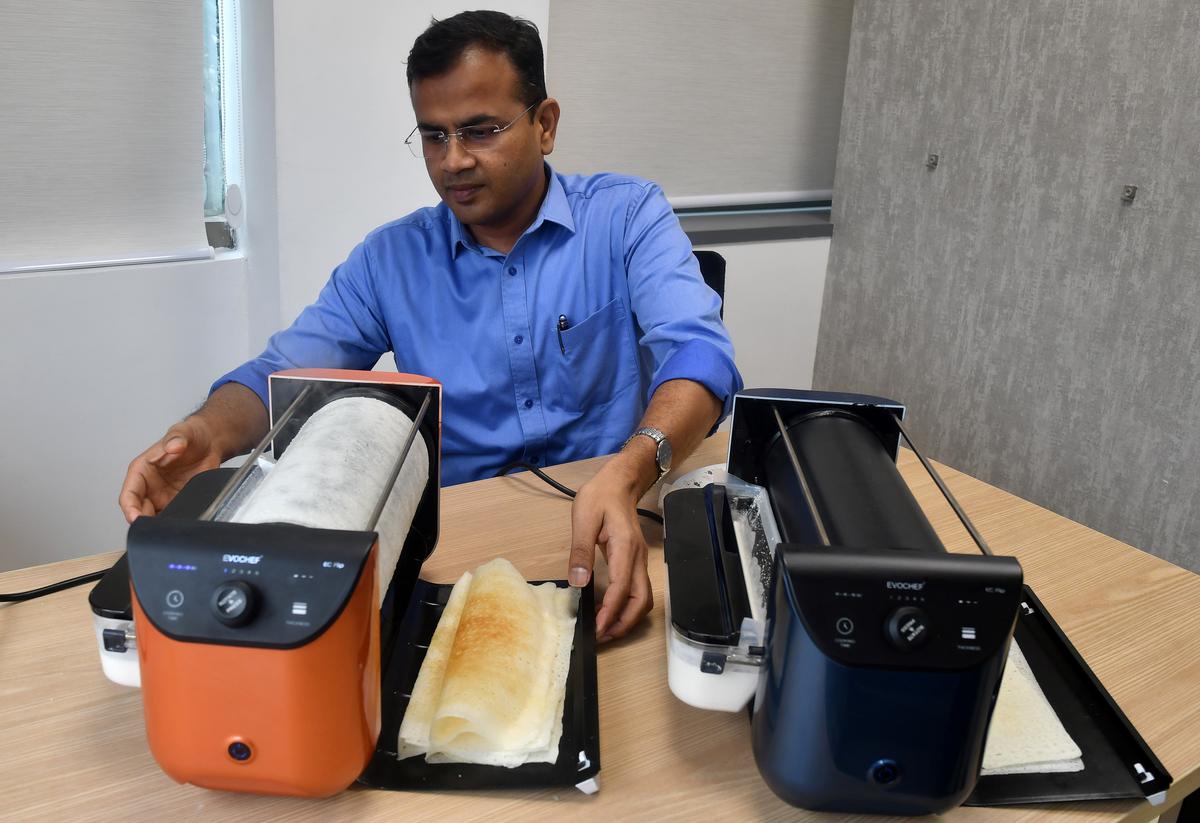 “I was expecting it to slowly get noticed in the market. Then all of a sudden it was on Twitter,” Senthilnathan says, adding with a laugh, “There may have been some criticism, but this is not reflected in sales.We couldn’t handle the number of calls and emails…Approximately 1.24 million people heard about the product in one week. as a result, they pivoted and started demonstrations in the office, providing a steady supply of dosas to staff.

“Customers tell us they’ve made all kinds of dosas with it: rava, ragi, bajra… even pancakes,” says Senthilnathan, adding, “As long as a batter can flow, it can be used.” As he speaks, a colleague presses the buttons, adjusting the thickness and time, and another dosa begins to cook. He carefully pours oil on the roll to make it crispy. It rolls out into a neat rectangle in a minute, evenly browned and crispy in the sections where the oil has sizzled. It tastes like a healthy, homemade dosa. “Although oil isn’t necessary, it can be added,” says Senthilnatan, adding that this has led to all kinds of customer innovation, from adding mayonnaise to chocolate sauce. “Some of them also grate cheese over the dosa as it cooks, so it melts.”

In response to the enthusiasm of non-resident Indians, Evochef now has dedicated partners to sell and provide after-sales service in Malaysia, Hong Kong, Singapore and Australia. With requests from hotel chains, the team is now considering different versions for commercial use, such as buffets. And while Senthilnathan is cautious about discussing his future plans, he states that they have other gadgets in the works, all aimed at kitchen automation, hinting at a competitively priced roti maker in the works. .

Meanwhile, its Thiruporur factory in Chennai, where the dosa printer is manufactured, is slowly ramping up production. The team there is, of course, powered by dosas. “It was one of the best testing grounds,” smiled Senthilnathan. “So far, we’ve done about 50-60,000 prints from every dosa maker out there.”

Change is difficult. Complaining is easy