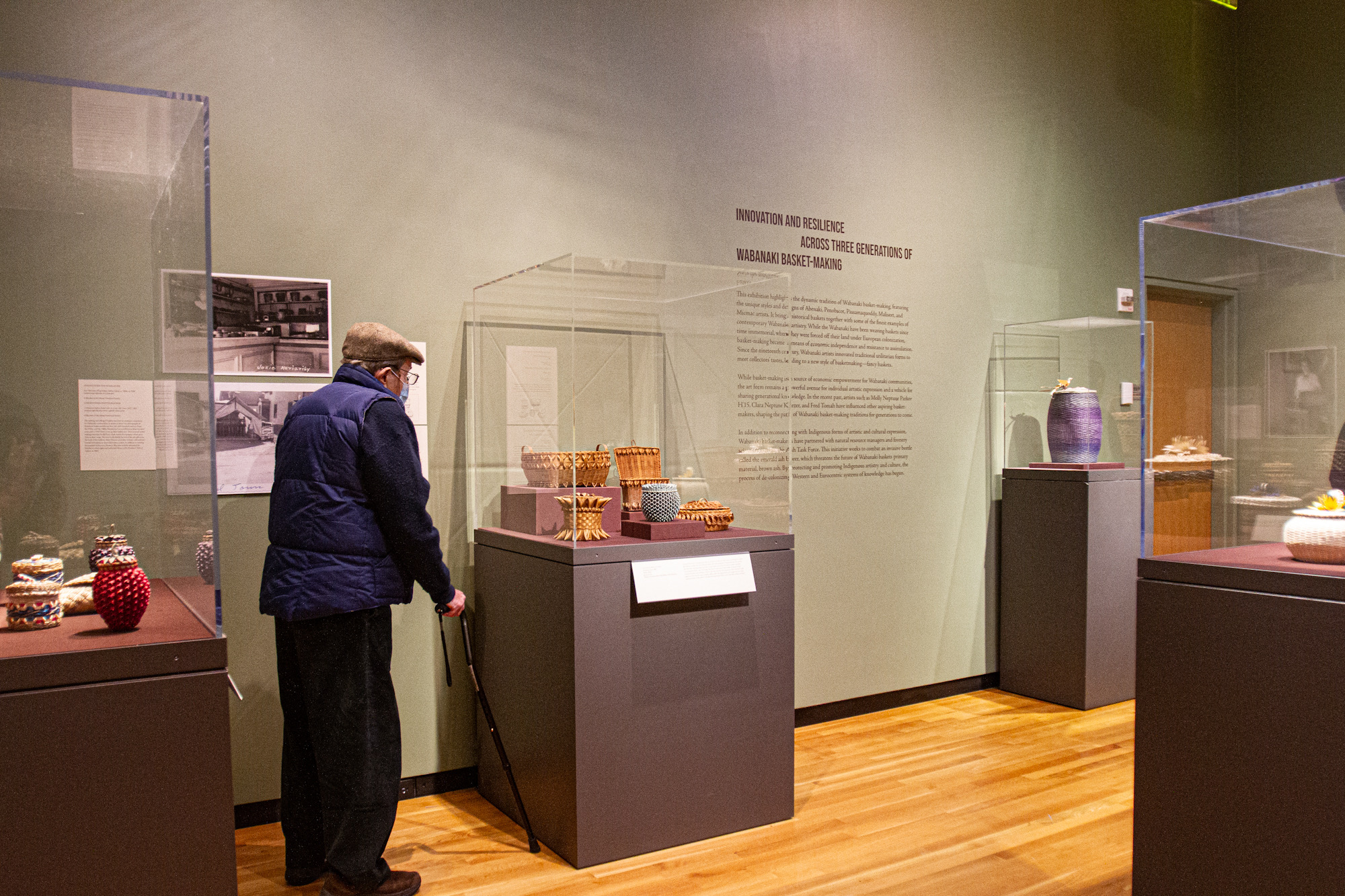 Weaving together identities – The Bowdoin Orient

The Native American Student Association (NASA) welcomed artist, activist, and model Geo Soctomah Neptune to campus for the opening of the Wabanaki Basketry Exhibit at the Bowdoin College Museum of Art (BCMA).

Shandiin Largo ’23, a NASA leader and student curator, sees the exhibit as an on-campus exhibit of Native American voices, with particular attention to the historical relationship between Indigenous peoples and museums.

“It’s one of the first times there’s been collaboration with the natives on how they should be represented,” Largo said.

The exhibit features the basketry of Geo Neptune, their grandmother Molly Neptune Parker, and other contemporary and historical Wabanaki artists. Bowdoin’s permanent collection consists primarily of baskets acquired as gifts from patrons and a recently acquired piece from Geo Neptune. Other pieces are borrowed from the collection of the Peary-MacMillan Arctic Museum and the Maine Historical Society.

The exhibit was created and curated by NASA executives, who selected artwork, researched and produced labels.

“There weren’t a lot of restrictions on what we could do, and there was a lot of collaboration between us as curators, but also with the staff,” Largo said.

Sabrina Lin ’21, Curatorial Assistant and Student Programs Manager at the BCMA, appreciated the ideas of student curators and highlighted the Museum’s role in providing support for their ideas.

“I think it’s really refreshing to get the perspective of students who aren’t necessarily art historians by training but who feel very passionate about the subject… [especially] Native American curators who have lived experiences in Indigenous communities who understand the value of a tradition passed down through family units and generations. The spirit of community, encouragement and mentoring [are] really showcased in the exhibition,” Lin said.

Neptune learned the art of basket weaving from his grandmother, Molly Neptune Parker, who was a famous basket weaver and indigenous leader.

“Molly was such a light,” Largo said. “She was such a huge inspiration to so many of us in terms of what we wanted to do with rebooting traditions on campus.”

Neptune’s art is also tied to his identity as a member of the Snow Owl Clan and as a two-spirit. A Two-Spirit is someone known in Indigenous communities as someone who sometimes embodies specialized work roles, gender variation, spiritual sanction, and same-sex relationships. The Wabanaki creation story of the two-spirited first person holds special significance for Neptune, who identifies as non-binary.

Other Wabanaki stories inspire Neptune’s works, such as “Apikcilu Binds the Sun”. This piece, presented in the BCMA exhibition, tells why night and day exist. Neptune also designed a basket named after the Passamaquoddy song “Ceremony of the Singing Stars” following the 2016 shooting of Pulse Nightclub in Orlando, Florida.

The immediacy and relevance of the traditions and stories that Neptune shares are part of what Largo and the other student curators wanted the Bowdoin community to take away from the exhibit.

“A lot of conversations around Indigenous identity are rooted in the past, and we wanted to bring that to a more contemporary light, especially in terms of Wabanaki basketry,” Largo said. “It’s really rooted in tradition and cultural practices, but it’s also something that has changed to become more contemporary, with newer designs being created. And it’s shared by people like [Neptune].”

Truth about persecution must be told during Beijing Olympics, say Christian groups