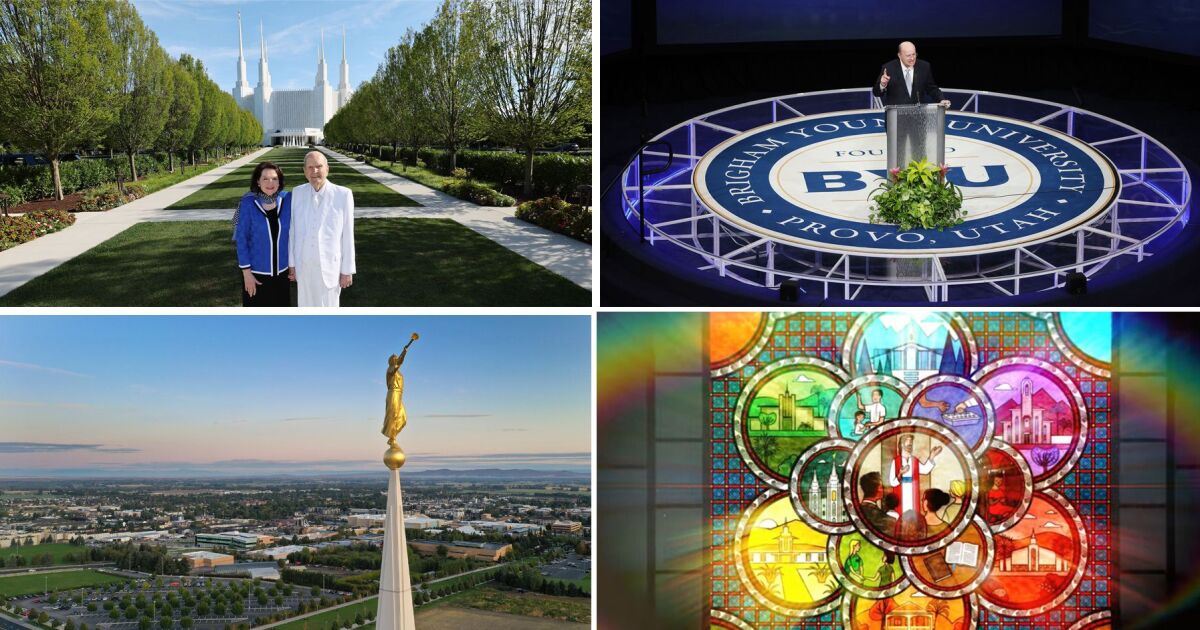 The First Presidency has announced the names of two temples in Idaho and England. The Church News reported that the First Presidency and other Church leaders met with Saudi Ambassador to the United States Princess Reema bint Bandar Al Saud, and also later Gambian First Lady Fatoumatta Bah. Barrow during their visits to Salt Lake City.

This week’s Church News podcast featured the Summers family as they found healing comfort in serving others and trusting in God’s plan amid personal trials and debilitating illnesses. The Church and UNICEF help refugee children in South Sudan through lifelong learning. Plus, see how Canadian children commemorated the Church reaching 200,000 members in that country.

Below are summaries and links to these nine articles.

While strolling the grounds of the renovated Washington DC Temple, President Nelson gazed at the iconic building and spoke of the “magnificence of the work done” to beautify and renew the sacred site. The leader of The Church of Jesus Christ of Latter-day Saints rededicated the temple on Sunday, August 14, as a place where all who enter will “feel your presence and know your love.”

Learn about the rededication, read the prayer, view a photo gallery, and watch a video with President Nelson

2. Elder Cook at BYU Education Week: Heed the Words of the Prophets

This year’s BYU Education Week marked a century since its inception in 1922 as Leadership Week. Elder Cook encouraged participants to pay attention to the words of the prophets. The Sunday School, Young Men, and Primary general presidencies were also introduced. Church Education Commissioner Elder Clark G. Gilbert spoke at BYU Education Week about why there are so many BYUs.

Other Church features on over 1,000 courses include how the Church helps members with disabilities, how to build emotional resilience and be happy, courses for youth, dating advice for young single adults , tools for family history, when loved ones question gospel truths, and seeking truth and developing unwavering faith — plus what was the favorite treat during the event. one week.

Learn about Elder Cook’s remarks, look back on a century of Education Week, and Church News coverage

3. Brother Gong tells a video about welcoming everyone to the Savior’s Inn

One afternoon several years ago, Brother Gong and his father visited the grand Cathedral of Chartres near Paris, France. A cathedral connoisseur points out three sets of Chartres stained glass depicting Adam and Eve coming out of the Garden of Eden, the parable of the Good Samaritan, and the second coming of the Lord, and explains that they tell a story.

“Taken together, these stained glass windows can describe our eternal journey. They invite us to welcome everyone with a room in their hostel,” Elder Gong said in a new Church Inspirational Message video released Aug. 18 titled, “Room at the hostel.”

Learn more about the experience and watch the video

Two temples of The Church of Jesus Christ of Latter-day Saints announced in the past year now have official names given by the First Presidency.

The second temple in Rexburg, Idaho will be known as the Teton River Idaho Temple, while the temple announced for Birmingham, UK will be called the Birmingham England Temple, according to the Monday 15 announcement. august.

Learn more about the temples

5. Princess Reema of Saudi Arabia meets with the First Presidency of the Church and women leaders

Saudi Arabia’s Ambassador to the United States, Princess Reema bint Bandar Al Saud, recently met with top leaders of The Church of Jesus Christ of Latter-day Saints, her second such visit to Saudi Arabia’s headquarters. ‘Church in Salt Lake City. The ambassador was greeted by the First Presidency as well as Elder David A. Bednar of the Quorum of the Twelve Apostles and Anthony D. Perkins, General Authority Seventy and President of the Middle East/North Africa Area. Church.

Following a February visit to The Gambia by D. Todd Christofferson of the Quorum of the Twelve Apostles with national leaders there, First Lady Fatoumatta Bah Barrow met during the week with leaders of The Church of Jesus Christ of Latter-day Saints in Salt Lake City.

His visit also included visits to Church educational and humanitarian sites beyond Church headquarters. Members of the general presidencies of the Church Relief Society, Young Women, and Primary organizations hosted a luncheon for Bah Barrow and his delegation.

This episode of the Church News podcast features a Latter-day Saint family from Box Elder County, Utah, who have found heartwarming comfort in serving others and trusting in God’s plan amid personal trials. and debilitating diseases.

Stan and Jennifer Summers’ life was changed by the illness of their son Talan, Jennifer Summers’ recent medical issues and other heartaches. The Summers have found joy in serving in the Church and their community and in sharing their testimonies of the restored gospel of Christ.

Listen to the podcast and see the transcript

8. The Church and UNICEF help refugee children from South Sudan

The United Nations Children’s Fund, known as UNICEF, with funding and support from The Church of Jesus Christ of Latter-day Saintsbuilt early childhood development classrooms and trained teachers in several countries on how to help refugee children.

Read more about a boy’s experience

A recent video of a virtual canadian children’s choir singing “I Love to See the Temple” helps The Church of Jesus Christ of Latter-day Saints commemorate its 200,000 member count in Canada. With 183 voices, the choir is a reflection of the Church in Canada, with the 53 stakes across the country being represented by singers.

The video also depicts a variety of cultures and languages ​​across the North American nation, with children singing in American Sign Language, Cantonese, English, French, Mandarin, Spanish, Tagalog and Michif, the indigenous language of the Métis people in Canada.

Learn more about the milestone and watch the video