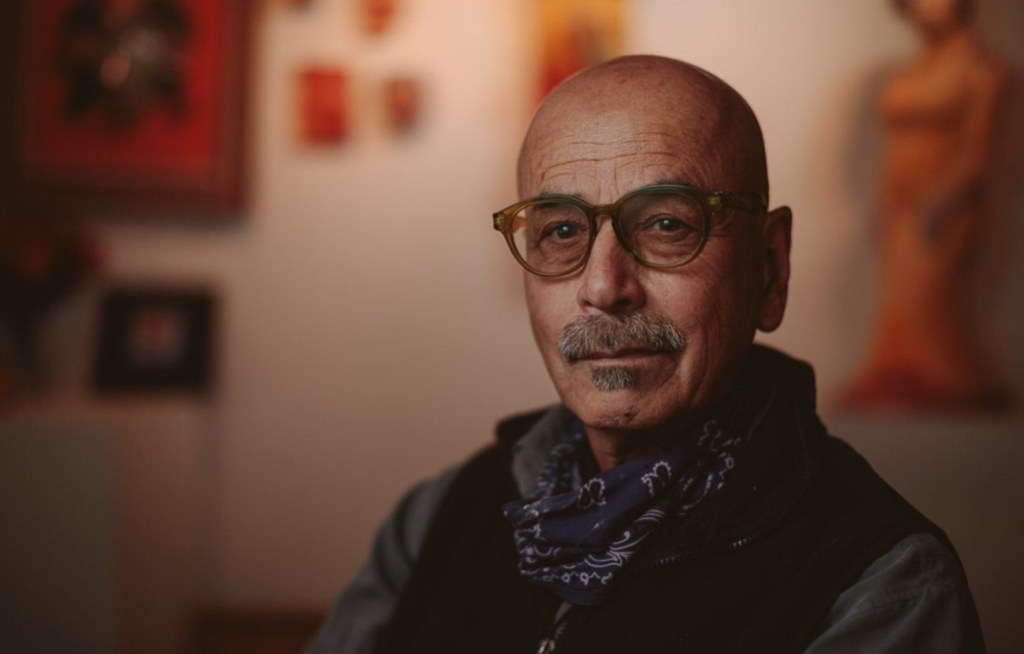 When Ernesto Sanchez hopped in a van with a group of locals from Bolinas to travel to Mexico to perform street theater in the early 1970s, he had no idea how powerful the experience was. Traveling with a traveling Mexican circus at a ring, he witnessed the enchanting power of the performance. It was also when the resident of Point Reyes Station was exposed to the art of puppetry and masks.

A few years later, he traveled to Bali to study mask making and mask dancing, a foundation that has remained with the mask maker and mask dancer today.

After decades of performing with Sausalito’s Snake Theater, which he founded in the early 1980s, as well as solo, he changed direction after receiving a scholarship from the Japan-U.S. Friendship Commission. to live in Japan, for a year.

Sanchez was inspired by his upbringing as a Mexican American who grew up in Southern California; his artistic studies in Asia and Indonesia, and 30 years of performing, teaching and collaborating with artists across the United States, Latin America, Europe and Asia to form his masks, altars, angels, sculptures and other mixed works.

His art can be seen in his studio and showroom at Point Reyes Station, as well as on the walls of the Wu Wei Tea Temple in Fairfax.

Q What about the masks that captured your heart?

A Masks have been a guide, so to speak, in my life. The first time I held and saw a mask, there was something about me that never went away. Masks have this transformative power that comes to life through the physical movement of the dancer. It is a timeless art form. Masks for us are more of an entertainment in Western culture, but for other cultures they are a gateway to another world.

Q Why has this scholarship in Japan been so important to you?

A It changed my life. Coming from California it took me a while to navigate but once I did I didn’t want to leave. I moved to Kyoto, which was not bombed in WWII, so it was full of temples and sculptures that were thousands of years old. As an artist and mask maker, I could stand in front of the sculptures and feel the depth of character, expression and spirit that the artists saw in these pieces. A weekly in English told you about things that were happening, about the ceremonies in the temples. Witnessing it really awakened something. I had by then been an artist, been on stage with masks, I had made people laugh and sometimes I took them to a deeper place, but all for entertainment. In Japan, I saw that it was a completely different experience and I realized that there was a deeper essence than entertainment with mask work, there was something deeper that I could draw. I had this awakening that took me out of the art of performance for the visual arts and ceremonial arts.

Q Eyes are often a theme in your work. How has your vision loss affected your job?

A It changed life. It started about nine years ago. I see the double and the blur, but I learned to navigate with it. I went to LightHouse for the Blind and Visually Impaired and took a week of retirement to learn how to physically navigate with vision loss. With art, I closed for a few years. I could not do anything. The emotional turmoil of losing your vision is not an easy process. My work has been impacted. All of the Wu Wei pieces have rhinestone eyes to make them sparkle and to me it’s a metaphor for what you see because we live in a magical palace.

Q Where does the spirituality of your work come from?

A I feel that I am not working alone when creating my art. Through intention and meditation, I strive to manifest the presence of the ancestors. Not only the cultural ancestors, but anyone at the time who worked with the same goal and the same intention. I ask permission if I work with symbols and themes from ancient times. I feel like I am working with the support and guidance of those who have created in this same vein over time. My father was Mexican, a culture with a strong belief in miracles and the spiritual. These strengths, these beliefs, help guide me in my work.